The Sandman Will Keep You Awake - The Loop

The Beretta M1918 was a submachine gun used by the Italian Army during the end of World War I.

The 3rd Marine Raider Regiment adopted this weapon in 1918 during their service on the Italian Front of World War I, becoming the first regiment of the division to use a submachine gun in combat. It was issued to particular officers and high ranking NCOs, as well as occasionally to scouting parties. The weapon first saw action at the Piave River and later on at Vittorio Veneto. Although it performed well in action, the Beretta was abandoned (as are most allied supplies) by the marine raiders before they returned to the United States after their occupation of southern Austria and northern Dalmatia. A copy of the weapon remains in the headquarters of the 3rd Marine Raider Regiment. 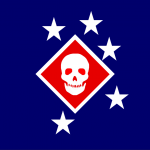